A Deeper Dive: Are We Heading Towards A Recession? | Fourth Quarter 2018

Home > Resources  > A Deeper Dive: Are We Heading Towards A Recession? | Fourth Quarter 2018

A Deeper Dive: Are We Heading Towards A Recession? | Fourth Quarter 2018

In a nutshell:  Wall Street and investors spend an inordinate amount of time trying to predict when the economy will see its next recession.  Numerous metrics, signals, and models have been developed with that specific goal in mind.  One of the signals most closely watched is the shape of the U.S. Treasury yield curve.  While the yield curve has proven to be perhaps the most reliable recession signal, its ability to indicate when a recession will occur and what investors should do with the information is not clear.  Trying to forecast recessions is akin to timing the market and not something we think investors should focus on.

For insights on our thinking regarding the forecasts of an economic recession and a purported recession indicator, read below.

Despite strong economic growth in the U.S. during 2018, there is increasing speculation that we are on the verge of an economic recession.  The financial industry is constantly on the lookout for recessions and there will always be prognosticators with dour views, but the last few months have seen a marked increase in recession related headlines and predictions

Naturally, headlines forecasting an imminent recession lead to investor nervousness and lots of questions.  In addition to noting the recession risk in our On the Horizon section, we thought we’d use this section to address the topic in greater detail. 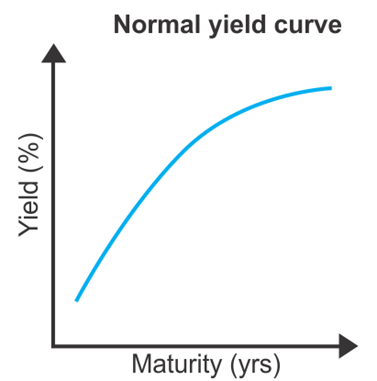 obsesses over a countless number of economic metrics and indicators in their efforts to predict the next recession.  One of those indicators, the yield curve, is undoubtedly behind many of the recent, gloomy economic outlooks.  While most of Wall Street’s metrics have proven to be of little help in forecasting economic recessions, the yield curve has shown a greater predictive power than most.  More specifically, the last seven times the yield curve has “inverted” a recession has followed.

Before we dig deeper into the apparent linkage between the two, what exactly is an inverted yield curve?  When investors in the U.S. talk about the yield curve they are usually referring to the yield for various maturities of U.S. Treasury bonds.  Typically, the longer the time until maturity the greater the yield.  This creates a yield curve that is normally upward sloping as shown in the accompanying graph.  There are periods, however, where the yield curve does not look “normal”.  It has at times in the past been “flat” or even downward sloping.  It is this downward sloping dynamic that is referred to as “inverted”.  As the below yield curve shows, the curve as of year-end (blue line) was quite “flat” when compared to the yield curve from just three years ago (dotted green line).  While there is some inversion at shorter maturities, most finance professionals would focus on the 10-year versus the shorter end of the curve and that has yet to “invert”.  It is clearly not far from doing so, however, which has caused many market pundits to forecast a recession on the horizon. The intention of this discussion isn’t to downplay or dispute the significance of an inversion of the yield curve, but to provide some context or perspective.  The financial industry’s obsession with an inverted yield curve makes it seem like any inversion is a harbinger of immediate economic ruin and that investors should run for the hills the moment it occurs or appears imminent.  A quick review of the last few yield curve inversions and ensuing market returns (below) makes clear that has historically not been the case.

While an inverted yield curve has indeed preceded the last seven recessions, there is typically a lag between the initial inversion and the start of a recession.  That lag can be quite long in some cases as shown in the accompanying graph.  As the 2nd graph shows, the stock market may also continue to move higher, sometimes impressively, during that period between inversion and the start of a recession.  Clearly, an inverted yield curve won’t be viewed as a positive development, but perhaps it is also not as ominous of a signal as the industry makes it out to be.

The inversion of the yield curve may widely be considered one of the best predictors of a coming recession, yet it clearly has shortcomings and has not proven to be particularly helpful to investors.  It may be natural for investors to search for clues regarding the next recession, but we’d also argue that it is futile and leads to the type of market timing actions that nearly every investor acknowledges is destructive to long-run portfolio values and returns.

Rather than obsess over economic forecasts, we believe investors should adopt the viewpoint of Jamie Dimon, the high-profile CEO of J.P. Morgan Chase & Co.  Mr. Dimon is privy to as much financial data and resources as anyone in the industry, yet during a Bloomberg TV interview last spring he remarked “Someone asked me once, what’s the odds of a recession?  I said it’s 100%”.  Note the absence of any mention of a time frame with his “prediction”!  Mr. Dimon, probably the most revered executive on Wall Street today, is in one simple statement acknowledging that recessions are both inevitable and unpredictable.

We do not and cannot know if an economic recession is around the corner.  If recessions are both inevitable and unpredictable then our time is clearly better spent on things we can control and building financial plans and portfolios that are able to withstand this unwelcome portion of the business cycle.

Contact Brad Swinsburg 404-874-6244 to get more insight on our thinking regarding the forecasts of an economic recession.

Explore more information on the fourth quarter of 2018 by visiting these links:

On the Horizon: Fourth Quarter 2018