In a Nut Shell:  The first quarter of 2018 was a good reminder of just how quickly change can occur in the investing world.  The most notable change was the return of volatility in both stocks and bonds.  While most major markets and asset classes st ill ended the quarter close to where they started the year, there was no shortage of price swings, both up and down, over the first three months.  The threat of higher interest rates and continued geopolitical drama – two things that were present but largely ignored during the prior year – captured the attention of investors. Markets reacted, sometimes violently.

While putting together the Market Recap section of our CFO report is always an involved process, the relatively consistent and positive returns of the prior year made that exercise noticeably easier over that period.  The lack of change from month to month and quarter to quarter allowed us the luxury of often getting a head start on the commentary even if we had to wait for final numbers.  That all ended, however, the moment the calendar year turned.

Not only have returns in major asset classes and market segments flip flopped between positive and negative throughout the quarter, they did so literally in the days leading up to quarter end.  There is an excellent chance that by the time this is published things will have changed meaningfully yet again.  As the graph below illustrates, the somewhat unremarkable end results for the quarter don’t tell the full picture of just how “bumpy” the ride was for investors.

Equity markets started the year strongly positive with U.S., International Developed, and Emerging markets all advancing more than 5%.  February brought a sharp reversal, however, as inflation concerns started a selloff that was further exacerbated by a technically driven, outlier event in volatility.  During the selloff the S&P 500 fell just over 10% from its prior high – a measurement the industry considers the threshold for a “correction”.  Markets did recover some of the losses from the February low point, but March brought further volatility as the announcement of U.S. tariffs on steel and aluminum imports led to fears of an approaching global trade war.  As shown in the following graph the first three months of this year have already exhibited far more daily volatility than was seen over the entire prior year. 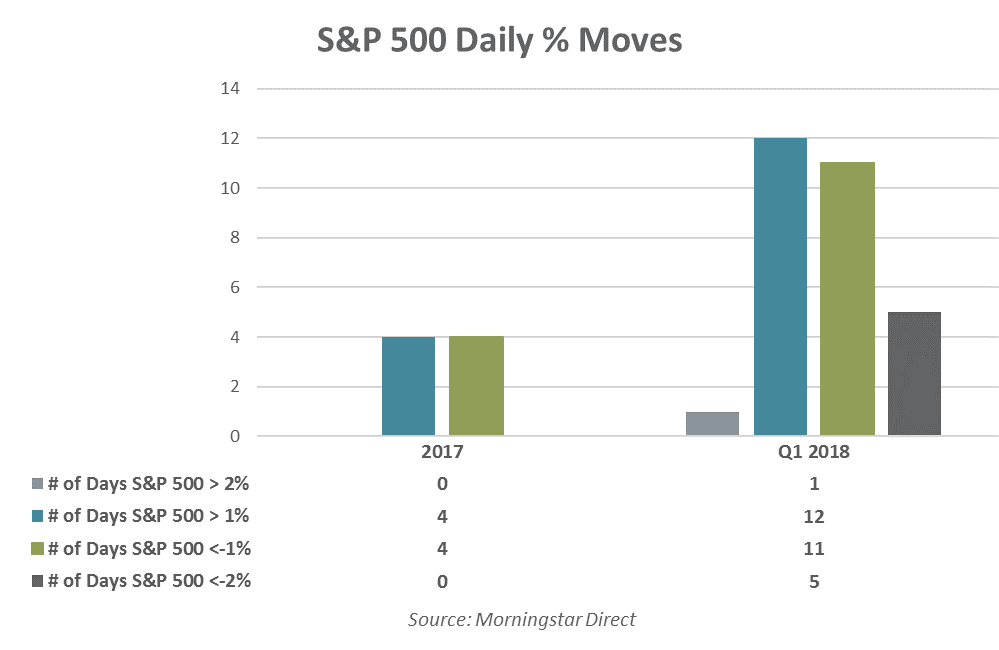 While overall returns in equities may have been rather lackluster, there was a significant level of dispersion or difference between the winners and losers of the first quarter.  Emerging markets continued their strength from the prior year and returned +1.3% outpacing both U.S. Large Cap (S&P 500, -0.8%) and International Developed (MSCI EAFE Index, -1.7%).   Growth stocks handily outpaced value stocks in the U.S. regardless of market cap as shown below.  From a sector standpoint there were again stark differences between the best and worst performers.  Consumer Discretionary (+3.1%) and Technology (+2.8%) were the only two sectors with positive returns for the quarter far exceeding the two worst, Consumer Staples (-6.9%) and Telecom (-7.5%).

While equities typically garner most of the attention from investors, movements in bond yields were important during the quarter.  Yields moved markedly higher across most maturities, but in particular at the shorter end of the curve as the Fed continued to raise short term rates and signal their intent for additional rate hikes.  Those actions, combined with increased inflation concerns led the 10 Year U.S. Treasury Bond to touch just over 2.9% intra-quarter, a yield it hasn’t seen since January of 2014.

Unfortunately, higher bond yields mean lower bond prices and returns for investors.  Credit spreads did remain tight for most of the quarter, so investors willing to take credit risk were able to offset some the losses from rates moving higher.  This past quarter highlights the current bond investors’ dilemma.  Bond investors may be anxious to see and lock in higher bond yields, but in order for that to happen we’ll likely need to experience periods like this past quarter where returns are flat to negative as rates adjust higher.

Energy prices, like stocks and bonds, experienced rather dramatic intra-quarter swings.  Natural gas prices initially rallied from around $3.00/contract to $3.50 in early February, only to fall to the low $2.60’s by quarter end.  Oil also initially rallied during the quarter and did finish 7% higher over the period, but experienced its own selloff during the broader February weakness.  OPEC production quotas appear to be holding and the potential for Iran and Venezuela sanctions helped lift oil prices.  Publicly traded REIT’s were a significant negative outlier for the quarter.  While most non-fixed income assets enjoyed a strong January, REIT’s fell and kept on falling through the rest of the quarter finishing down -7.4% for the full quarter.  High valuations and interest rate sensitivity are likely to blame for much of the weakness.

If you’d like more information or have questions about why the threat of higher interest rates and continued geopolitical drama captured the attention of investors, please contact Brad Swinsburg 404-874-6244.

Explore more information on the first quarter of 2018 by visiting these links:

A Deeper Dive: The Impact of Rising Interest Rates