Home > Resources  > Finding Value in Markets Outside the U.S. 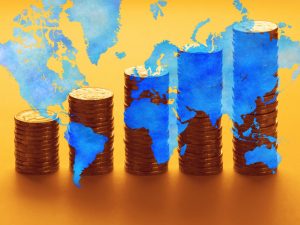 With the U.S. stock market reaching new highs on a seemingly daily basis, investors are anxiously – but cautiously – anticipating what will happen in the months ahead. With so much attention on the U.S. equity market some investors may have forgotten the potential rewards from investing outside the U.S. While international and emerging market stocks can be more volatile, the current return potential may exceed that of the U.S. stock market considering the current valuations. International stocks have cumulatively trailed U.S. equities over the seven years since the Global Financial Crisis, creating the current situation where foreign stocks are cheap when compared to U.S. stocks.

Uncertainty in the E.U.

One cause for concern overseas is that Europe remains highly challenged, with uncertainty about the future of the European Union, low growth and high unemployment. But if the euro holds together, the European market’s lower valuation compared to the U.S. does not seem justifiable. When political stability is restored, the region’s stocks may improve very quickly. Given that possibility, we may enter a period in the next several years when international stocks begin to outperform U.S. stocks.

Emerging Markets: Competition is Ramping Up

One area that has already begun to outperform U.S. stocks is emerging markets stocks which include companies in China, Brazil, India, Taiwan and South Korea. As of January 31, 2017, emerging market stocks as measured by the Morgan Stanley Country Index Emerging Markets (MSCI EM), were up 25% over the past 12 months, outpacing the S&P 500’s return of 20% over the same time period. Part of this outperformance has been centered in countries with significant commodities exports (including mining and energy companies) as commodity prices have stabilized along with the rebound of oil prices.

In addition to commodity exporters, a new breed of technology companies are helping drive growth in the developing world. China has the world’s largest eCommerce market; one Chinese company, Alibaba, has an 80% share of it. Alibaba’s sales through its Internet platform are three times greater than what sells through Amazon worldwide. Other fast growing Chinese companies include Baidu (one of the world’s largest Internet search companies) and Tencent which created WeChat, the most popular messaging app in China. Reportedly, Facebook is attempting to copy the features of WeChat into its Messenger app in order to add mobile payments, games, streaming music and other services like ride hailing and food delivery in order to stay competitive.

The focus has naturally shifted to technology and consumer companies that are benefiting from rapid adoption of mobile phones, increasing Internet use and rising wealth in emerging markets. Growing populations will continue to shape consumption habits and most of the world’s 2 billion millennials (those born from 1980 to 2000) live in emerging markets. In India alone, about 150 million people, about the size of the entire U.S. working population, will enter the work force over the next decade. The growing middle class with increasing disposable incomes in the emerging markets, represents a huge catalyst for growth in a range of sectors including financial services and consumer durables.

Emerging markets as a whole reported 4.2% Gross Domestic Product (GDP) growth for 2016 which exceeded the U.S. growth in GDP of 1.6% with similar growth rates expected for 2017. China will continue to play a major role as a growth leader in the emerging markets with expected GDP growth rate of 6+%. China’s GDP now represents 18% of the world’s total GDP, surpassing the 16% of the U.S.

Risks in All Markets

While emerging markets are likely to continue benefiting from favorable demographics and growth projections, investing in them comes with unique risks. Emerging market returns will be impacted by diverse economic and political challenges from within their respective regions and also from policy changes in the developed world.

Clearly, investing outside the U.S. introduces varying risks and challenges, but valuations ultimately drive long-term returns. Current valuations suggest that many of the risks and fears we’ve cited are already “built in” or reflected in asset prices.

At Smith & Howard Wealth Management, we believe that close monitoring of valuations and overall market conditions combined with our financial planning and our approach to diversified investments across asset classes provide our clients with the foundation for a portfolio that can help them meet their long-term financial goals.