“Somebody once said that in looking for people to hire, you look for three qualities: integrity, intelligence, and energy. And if you don’t have the first, the other two will kill you.”  – Warren Buffet

Unlike most U.S. holidays, Labor Day is a celebration without rituals, except for shopping and barbecuing.  For most people, it simply marks the last weekend of summer and the start of school.

The holiday’s founders in the late 1800’s envisioned something very different from what the day has become.  They were looking for two things:  a means of unifying union workers and a reduction in work time.  These early organizers clearly won, as the average person working in manufacturing now puts in a bit over 40 hours a week (as opposed to 60 – 70 hours in the late 1800’s) and most people work an average of five days a week (shortened from a 6 – 7 day average workweek).  Shortening the workweek was one way of turning the working class into the consuming class by creating more time off to spend wages on traveling, entertainment or dining out.  Hence, our consumer-driven economy was ignited.

During this Labor Day week, we thought it would be an appropriate time to reflect on the state of the workforce in America and the labor market in general.  In a nutshell, the unemployment rate is near the lowest level since the 1960’s, job growth remains robust, and wage growth is picking up.  All of this is good news for workers and for those looking for employment. 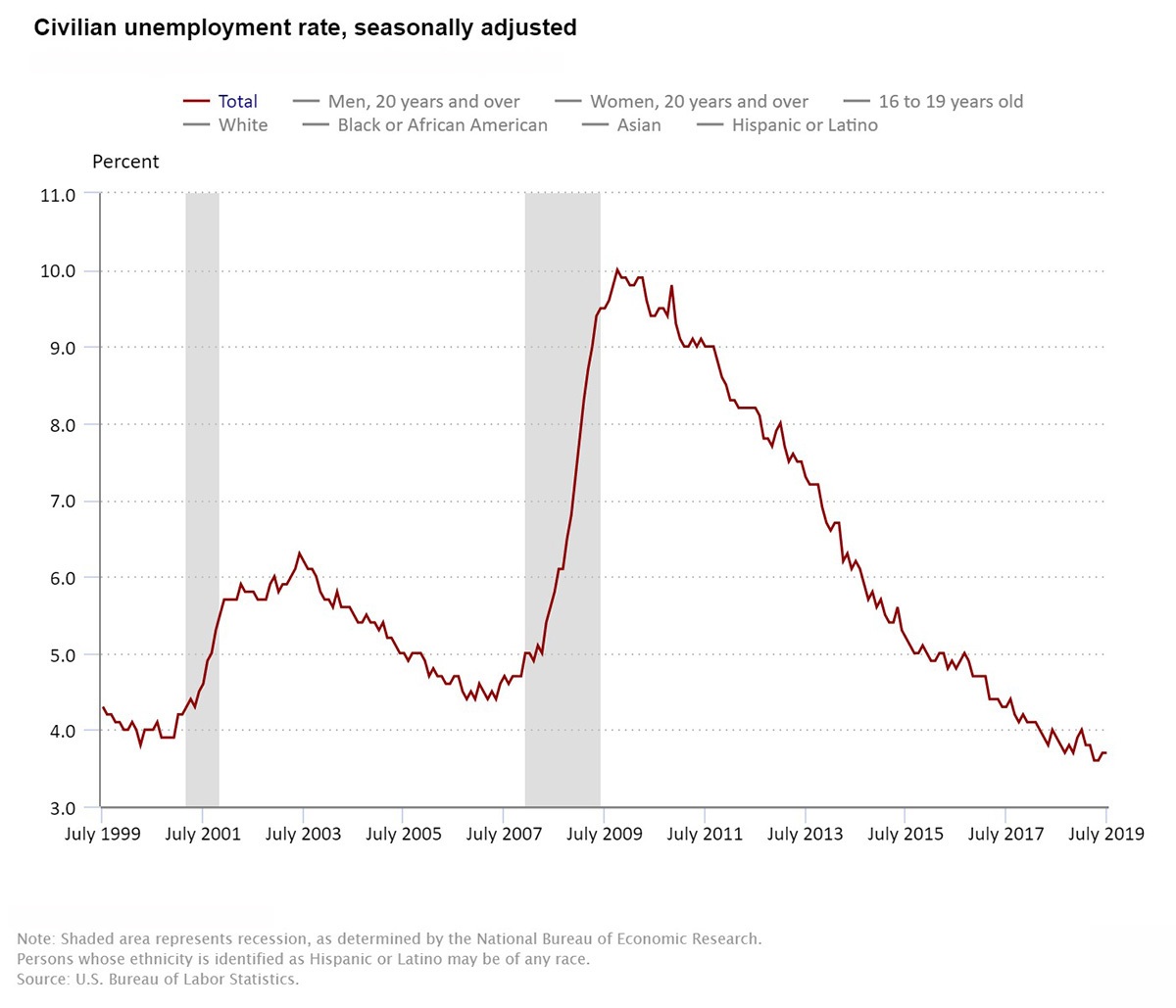 Meanwhile, job growth remains healthy.  After expected downward revisions from the initial Bureau of Labor Statistics’ estimates, job growth will average between 160,000 to 170,000 new jobs per month over the past 18 months.  This growth rate is well ahead of the 100,000 new jobs needed per month to keep the unemployment rate steady.

In the last twelve months, average hourly earnings are up 3.2% versus a 2.8% gain in the twelve months ending July 2018.  In the chart below, you can see the average hourly earnings by industry.  The top two industries by a number of jobs added last month are the Education and Health Services and Professional and Business Services industries.  The majority of new jobs being created are in higher-paying fields which is encouraging news to those seeking employment. Perhaps the best news about the labor market is that, in the past year, the fastest growth for usual weekly earnings has been at the lowest part of the income spectrum, with workers 90% down the income scale having wage gains of 6.2%.  Those with less than a high school degree have experienced wage gains of 6.1% in the past year versus 3.2% gain for those with advanced degrees beyond college. In essence, on average those who earn the lowest wages are making the largest percentage gains. With the headline news switching back and forth from positive to negative every day in recent weeks (and sometimes even intraday), we prefer to focus on economic news.  In the case of the American worker and the consumers who are driving our economy, the news is good.

Please contact us with any questions and we look forward to talking with you soon.